Vinland estate, one of Newport's original mansions in the Beaux-Arts tradition, also housed stables, a gate lodge and an elaborate gate and fence. Its buildings consisted of McAuley Hall, Tobin Hall, Angelus Hall, the Misto Gatehouse, and Marian Hall. The 13-acre property, which included the homestead of William B. Lawrence, was purchased in 1881 by Ms. Catharine Lorillard Wolfe, heiress of Wolfe Hardware and Lorillard Tobacco, for $192,000.  Wolfe was estimated to be the richest unmarried woman in the world. She was known for her philanthropy and love of art and through her lifetime amassed a collection of the world's most notable watercolor and oil paintings. The collection was bequeathed to the Metropolitan Museum of Art.

Ms. Wolfe spent many summers in a Newport home overlooking Old Stone Mill, with its legend of Viking origins. As a tribute, she decided to build a new cottage with a Viking theme in a Richardsonian Romanesque style.  The architects Peabody & Stearns of Boston were selected, along with builder O.E. Clarke of Boston.

Vinland, constructed from 1882-83,  with rugged ashlar walls, round arches, and blocky columns served to evoke a Scandinavian "Viking" look, and the theme extended to the exterior window surrounds and string courses with carvings based on the interlacing 8 figure designs found in Celtic manuscript borders.  The home was decorated by Mr. Richard Codman in the style of the Aesthetic Movement.

Railroad tycoon Hamilton McKown Twombly purchased the property and his wife, Florence Adele Vanderbilt Twombly, sister of Cornelius Vanderbilt II, oversaw extensive renovations of the mansion.  A new section was added to the home, and much of the original paneling and fixtures were removed and replaced for ones that represented a heavier French Baroque style.

Salve Regina acquired the Vinland estate from Mrs. William A. Burden, daughter of Florence Twombly, in 1955, and named it in honor of Catherine McAuley, founder of the Religious Sisters of Mercy.

Links to archival photographs of the following properties:

McAuley Hall housed the university's library for decades until the existing library opened its doors in 1991. This rambling red sandstone structure was inspired by Longfellow’s poem about Vikings, "The Skeleton in Armor." Its exterior architectural elements feature carved belt courses and window casings with motifs drawn from old Celtic manuscripts. Interior architectural elements reflect the stylistic influence of the Arts and Crafts movement. 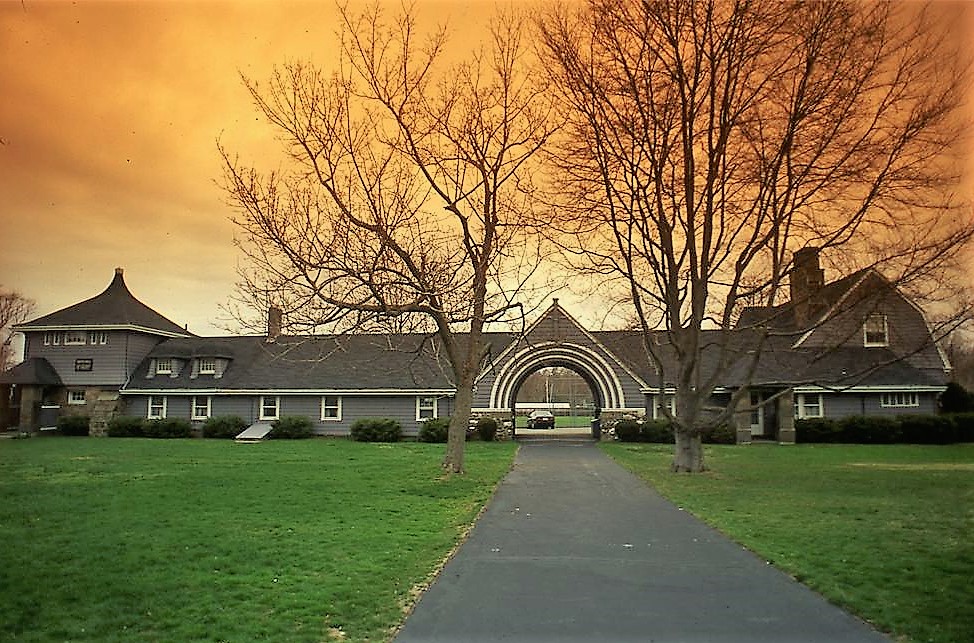 Once the site of the hennery and cottage, separated by a Romanesque archway for hygienic purposes, architects Peabody & Stearns incorporated a pagoda roof, bowed eaves and stone buttress into the sawtooth shingled structures known on campus as Stonor and Drexel Halls. Salve acquired the buildings, which are named for longtime university friend Noreen Stonor Drexel, in 1962. Stonor Hall houses the offices of Conferences and Events and Human Resources. The Office of International Programs, which coordinates study abroad experiences and provides support to international students, is located in Drexel Hall.

Sources: "Newport through its architecture" by James L. Yarnall and the Campus buildings of Salve Regina University.

Other buildings of Vinland 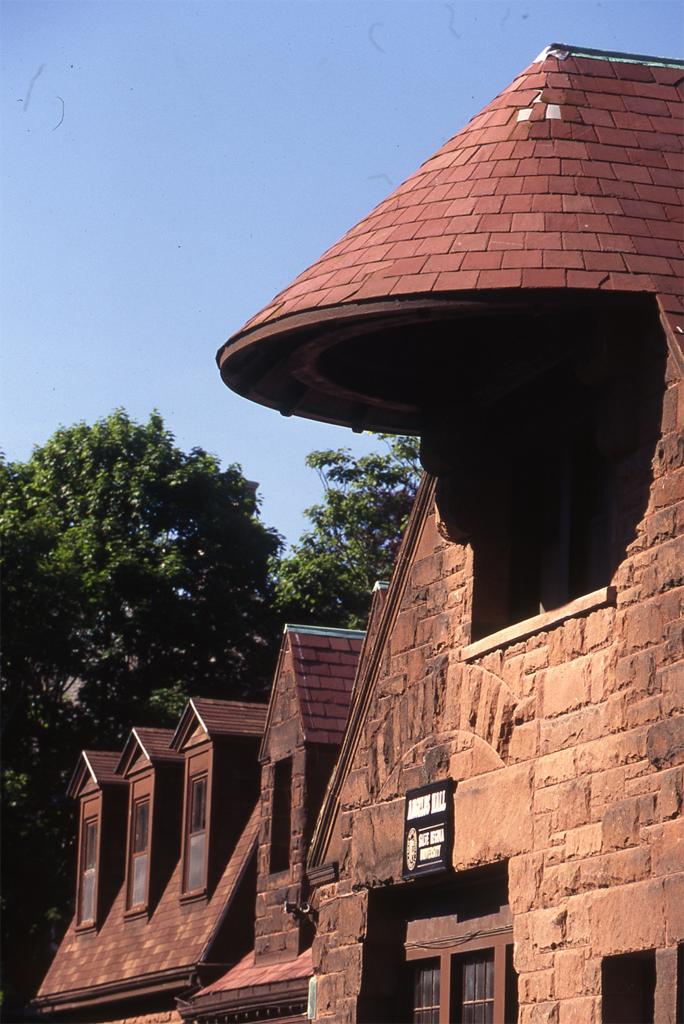 A view of the central overhang of Angelus Hall. (Photo by John W. Corbett)

Angelus Hall, a carriage house and former housing for the butlers and footmen, was acquired in 1955. Designed by Peabody & Stearns in the Richardsonian Romanesque style, it features a central overhang in the form of a hay lift characteristic of European rustic architecture.

Marian Hall was a later addition to the Vinland estate. The former caretaker's cottage reflects the Colonial Revival style. 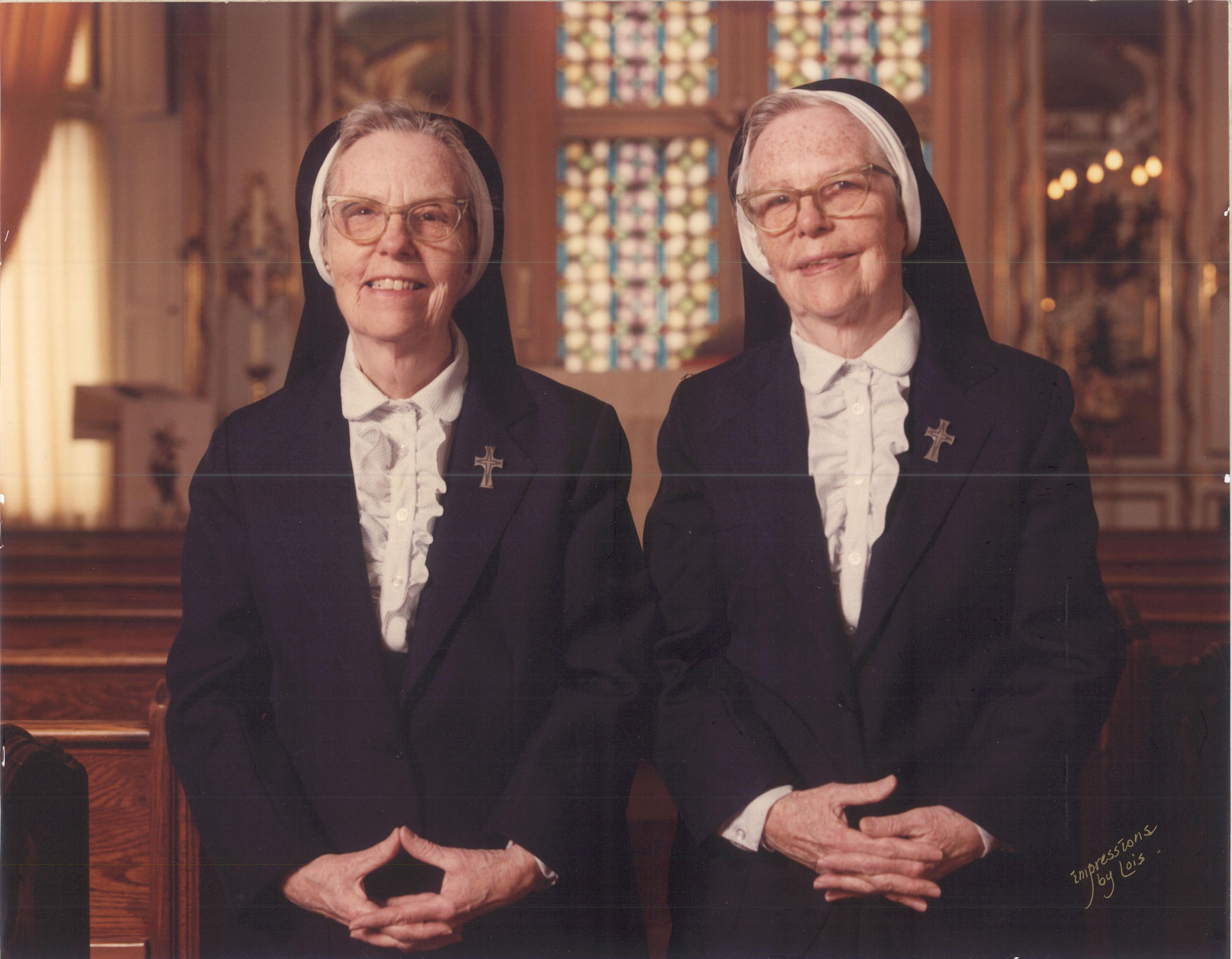 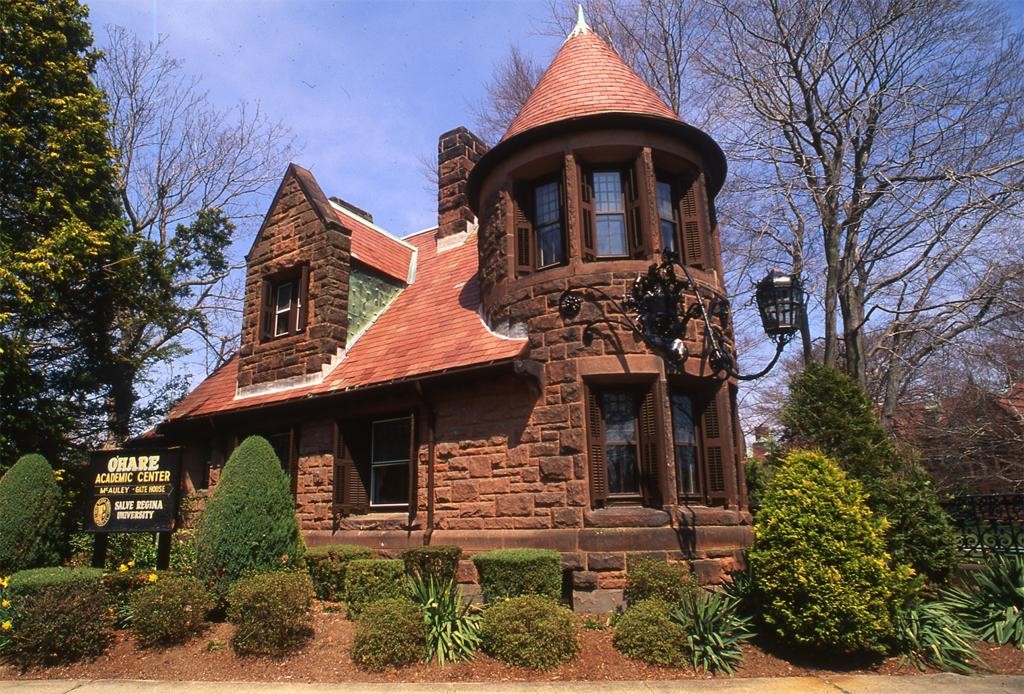 Built by Peabody & Stearns in the late 1800s in a Richardsonian Romanesque style, this building was known as the Gatehouse until its rededication in 2014 as the Misto Gatehouse, in honor of Dr. Leona Misto, RSM. (Photo by Kindra Clineff)

Significant architectural details include a gabled dormer, two chimneys, a turret with a conical roof, brown shudders alongside each window, and an intricate wrought iron light. The Gatehouse served as the residence for the gardener of the Vinland estate. 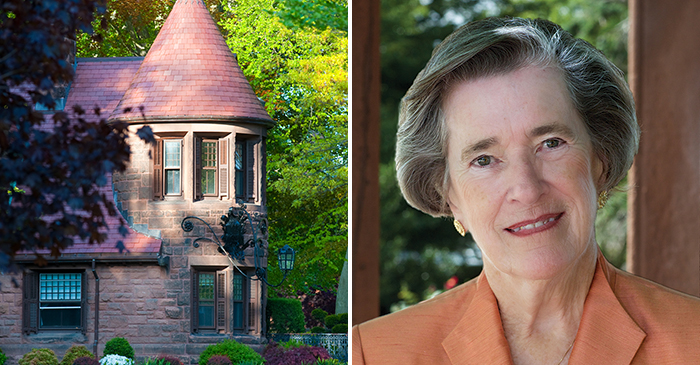 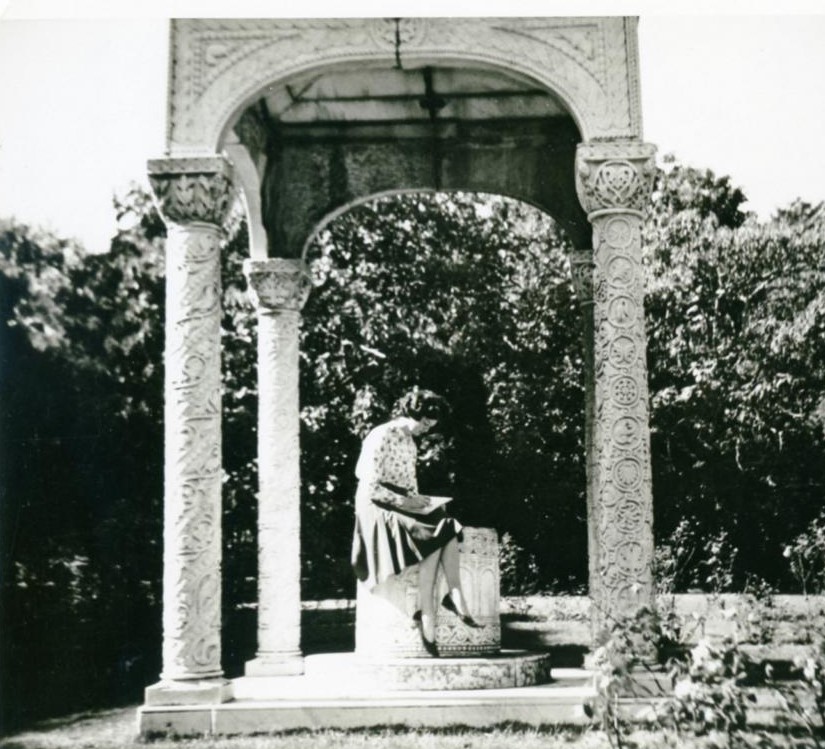 A woman sits on a baptismal font in this undated photo. The structure, constructed by Peabody & Stearns in the 1880s, was located on the grounds of McAuley Hall, but removed in the 1960s. Pagan and Christian themes adorned the pillars.